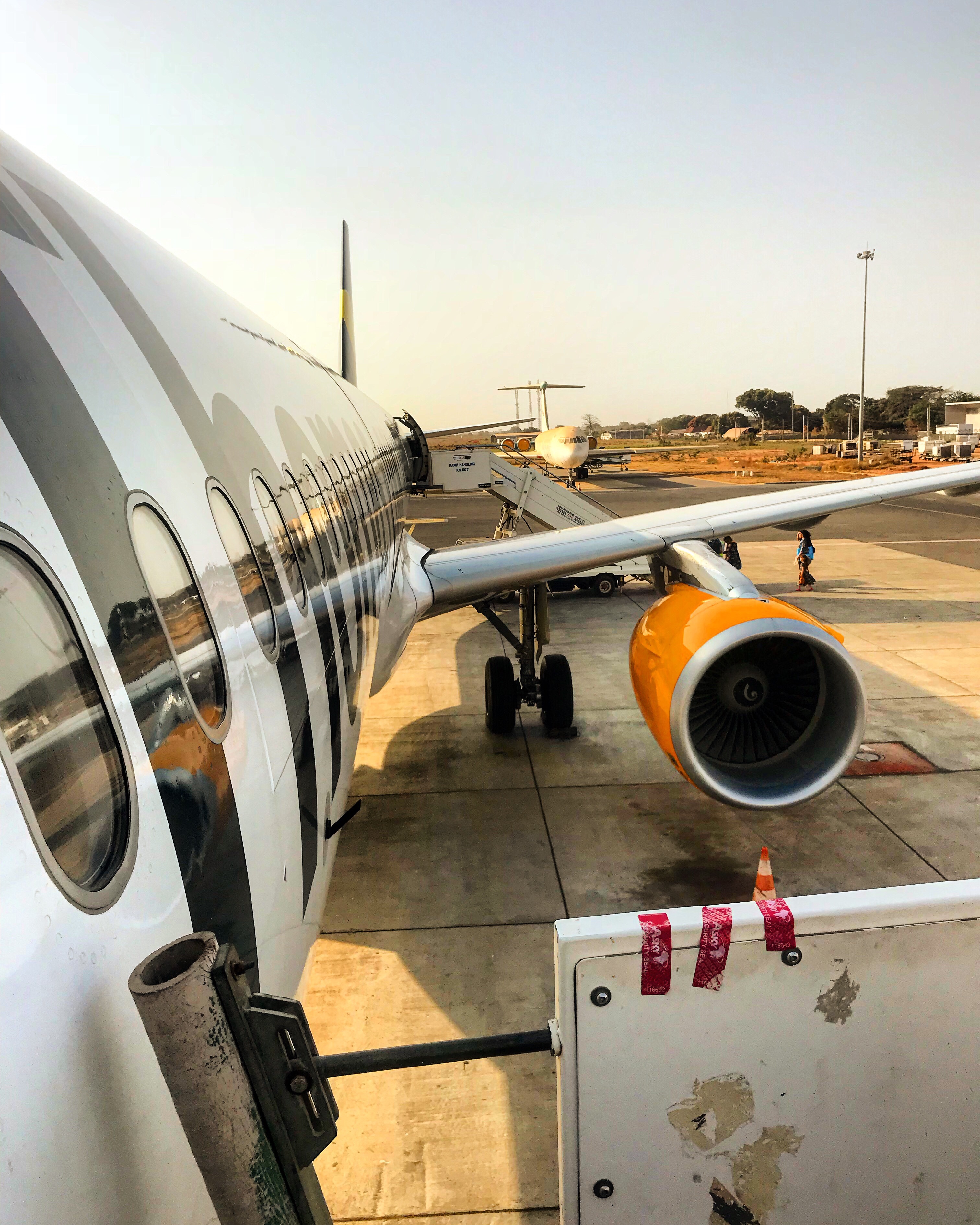 Just a short review of our trip with Thomas Cook Nordic from Stockholm to Banjul, Gambia via Las Palmas in their Airbus A321 (booked trough Swedish tour compamy Ving).

When previously flying to Cape Verde with Thomas Cook Airlines, they put us in their large twin aisle A330 aircraft. Hence, I was a little surprised when we booked a trip to Gambia, which is about the same distance, but for this trip the much smaller single aisle A321 is used. Unlike the larger aircrafts, there’s only economy class onboard, but you can “upgrade yourself” with extras such as seat pairs, fancier meals and proper champagne to make the trip a bit more bearable.

To get some extra privacy we pre-booked one of four seat pairs (rows 10 and 24) for about 500 sek for two, one way. The problem with these seats though is that you are right in front of the emergency exits, meaning no window, and that you, when seated on the right hand side also sits next to the crew seat. That is not a great concern, but it means that the crew will slam down next to you the few seconds before take off our landing.

Crowded for such a long flight

The plane, since not really intended for such a long flight as Stockholm-Banjul (about 9 hours), feels quite crammed. There are four lavatories – one in the front and three in the back. And since it’s a “charter” flight, people tend to drink quite a lot, and hence there’s usually a line, especially in the front. 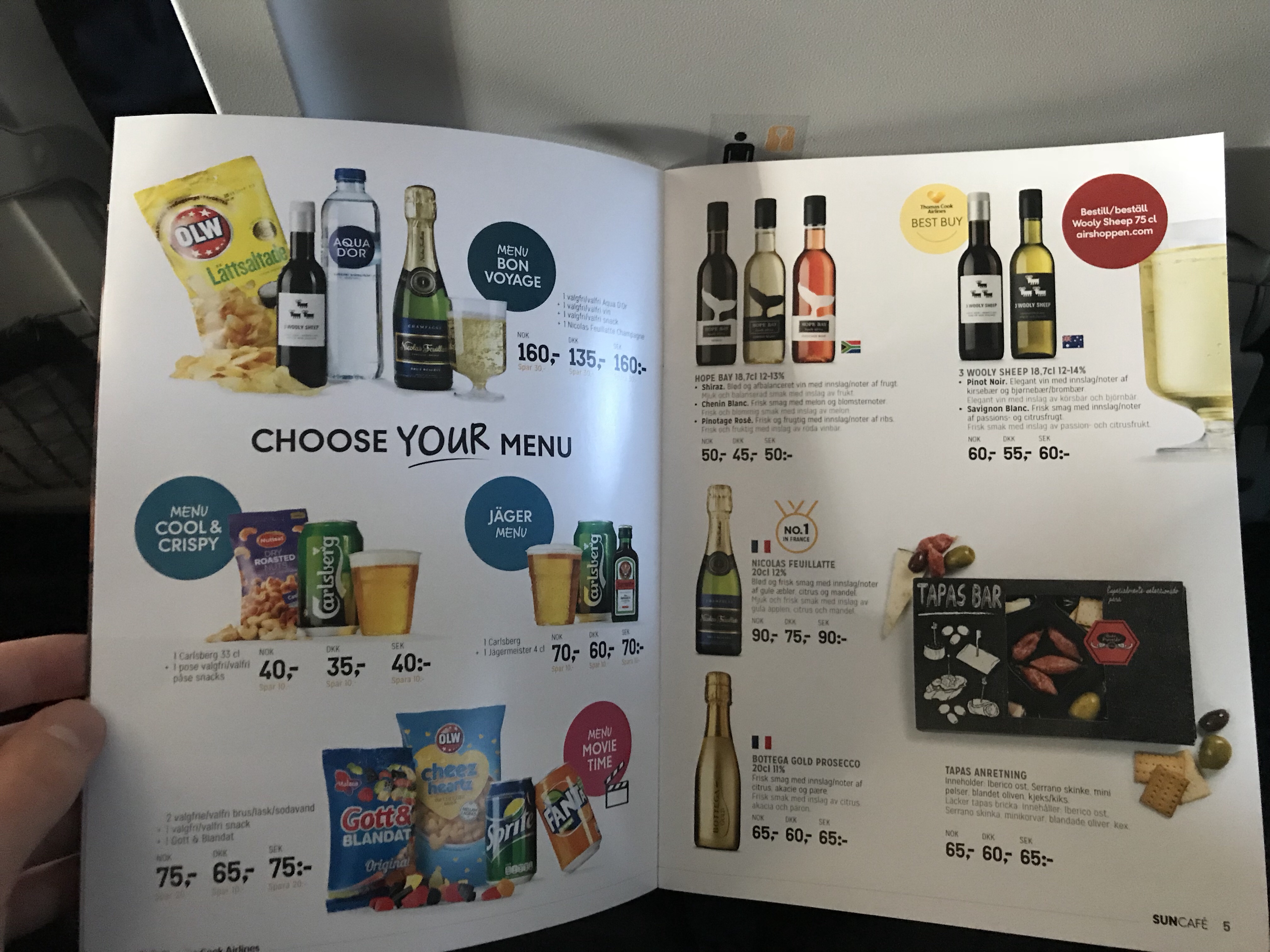 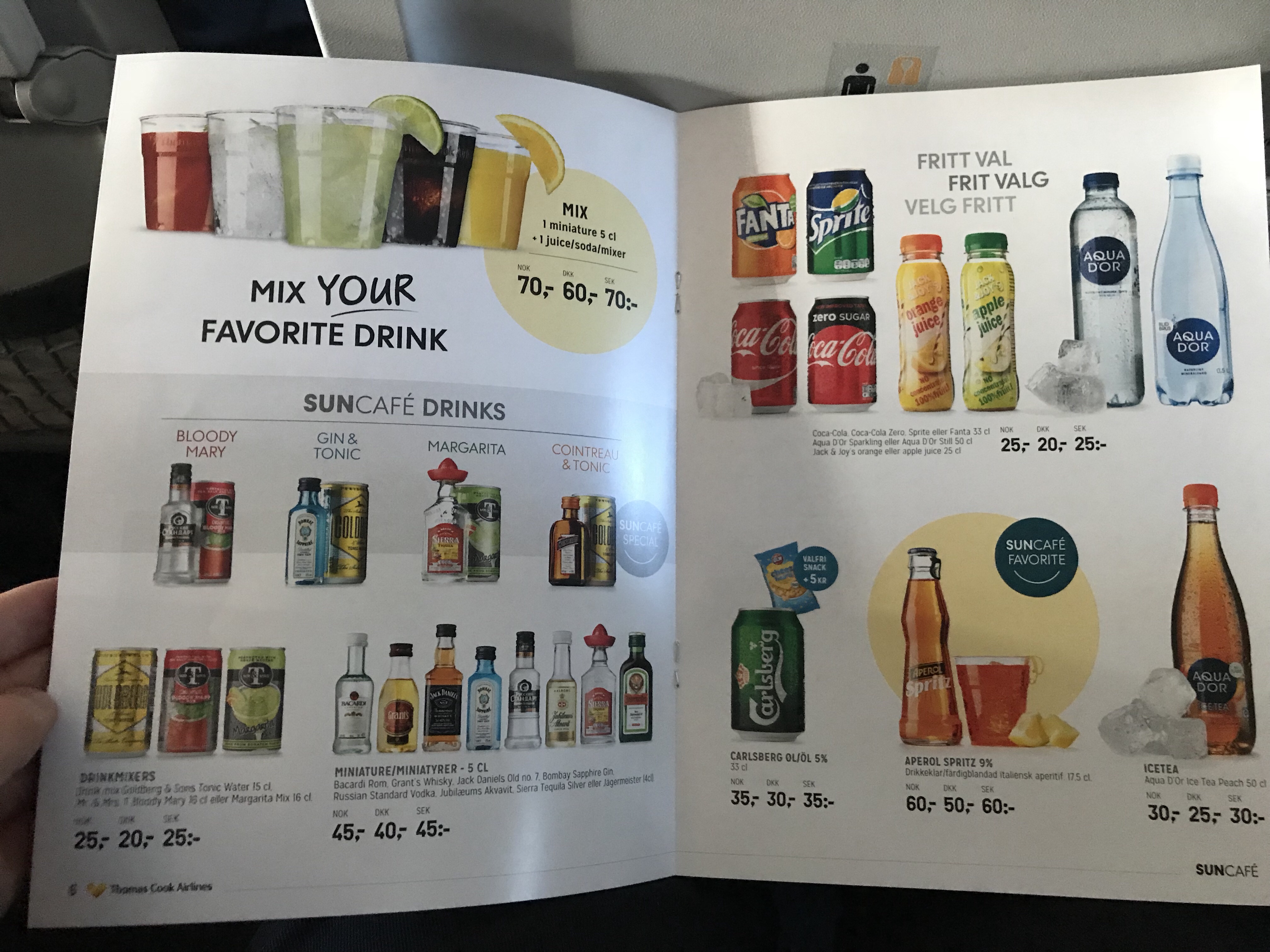 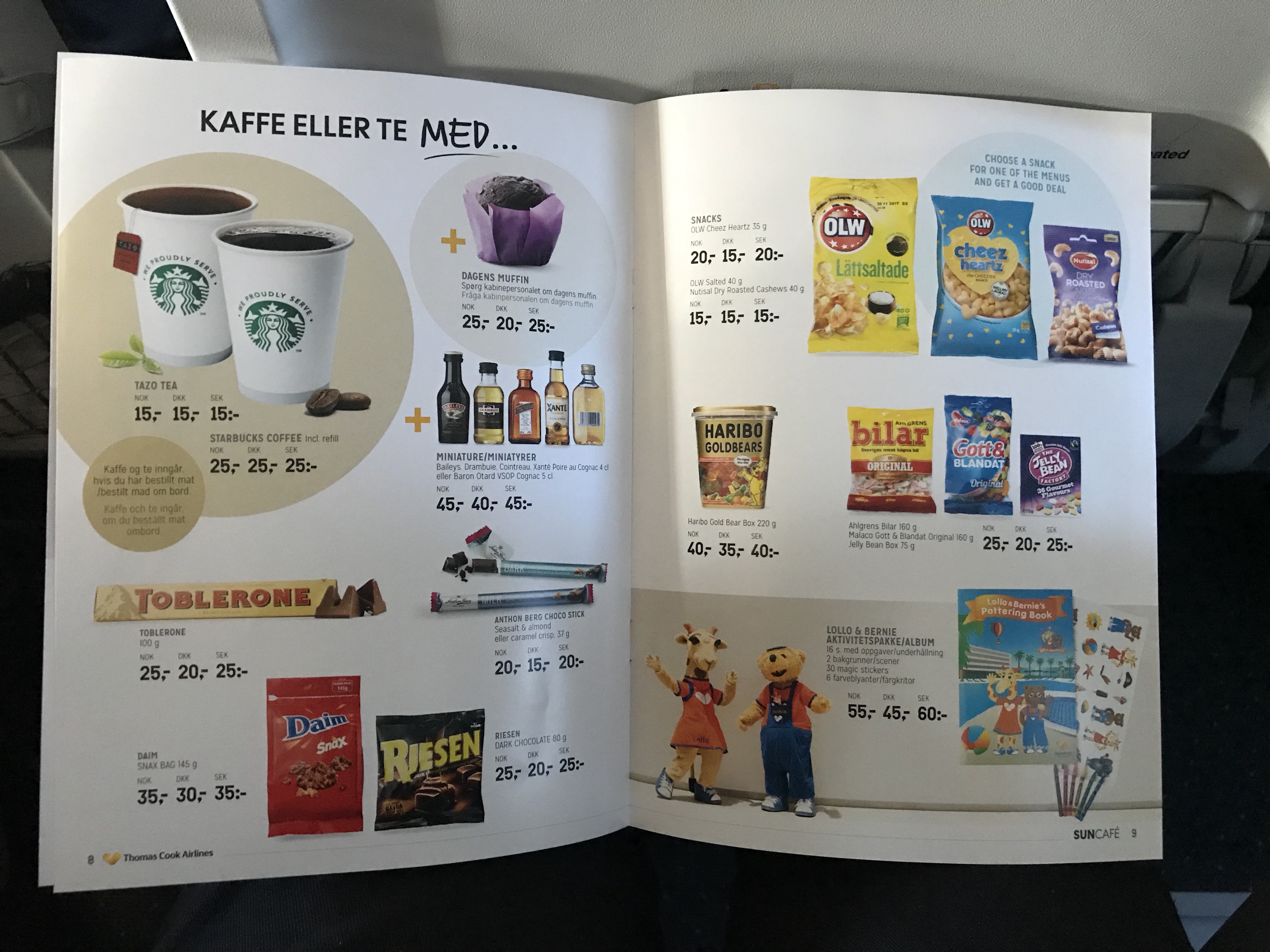 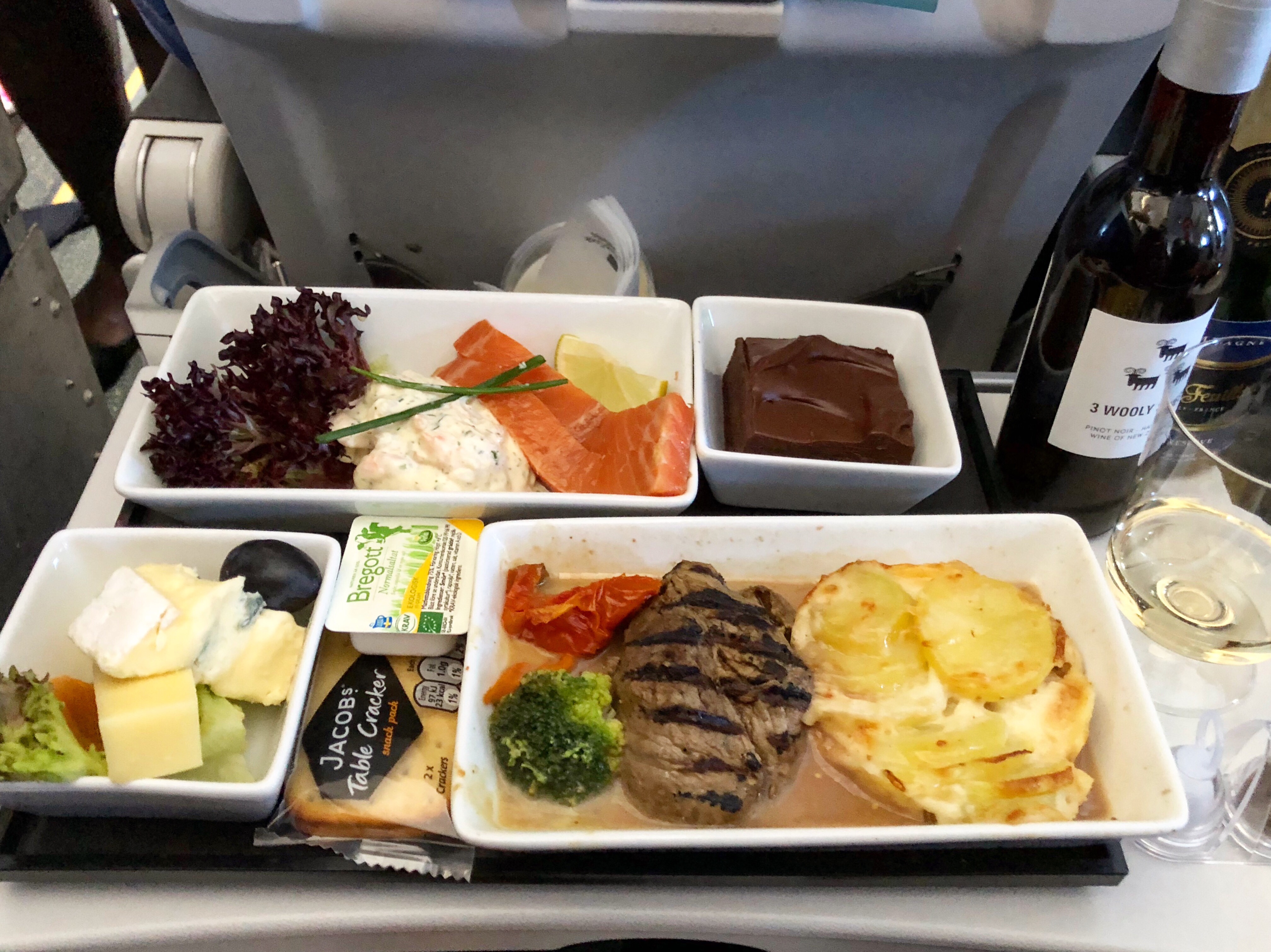 We opted to upgrade to a ‘Royal Meal Meat’ which is 295 sek per person. It is quite steep, but then a drink of choice (except champagne) is included, so in the end it is 130 sek (€14) more than a regular meal and a beverage – in my mind it was worth it. The Royal Meal came on a tray with ‘real’ porcelain bowls and plates, and all dishes were served at the same time. First up was a Swedish Skagenröra, meaning a shrimp, dill and mayo salad, and some sliced salmon. Both were surprisingly good, especially the shrimp salad. Warm bread was also served. Second was a “grilled”, it actually had decent charr marks, beef fillet served with green peppercorn sauce and potato gratin. As usual, the meat was quite cremated, but flavours were good. After that was a few slices of nice quality cheese, crackers and a few pieces of fruit (grapes and dried apricota). Finally a square of a really nice mint-chocolate cake that would’ve been yummy even outside of a plane. This was washed down with Nicolas Feuilatte champagne (90 sek) and Wooly Sheep Pinot Noir from New Zealand (60 sek). Credit to Thomas Cook for providing decent wine onboard!

On the shorter leg to and from Banjul, a small complimentary meal was served. Bread, pastrami and coleslaw on the way to Banjul. Pasta salad, salmon and bread on the way from.

Since the plane is so small, it has to land on Gran Canaria for refueling, adding about two hours to the trip. On the way there, we just sat around in the plane while refueling. On the return flight however, we had to de-board, go through passport control and security check before reboarding. As I understood it though, this was an exception due to planned service of the plane we arrived in. We kept our seats as it was the same plane model but obviously had to remove all our stuff from the plane.

All in all, the flight to The Gambia was pretty much a breeze since it’s during daytime. We brought and Ipad, ate our upgraded meals and drank champagne. The return was worse though as the plane is tiny and you fly home at night, meaning you’d probably want to sleep. It was nearly impossible to find a surviveable sleeping position (and I’m not a tall person). Since we had the crew seat next to us, there was no window to lean on either for extra support. But, it is still about 8 hours of flying in total, so of course we survived, and it was absolutely worth it to visit amazing Gambia. 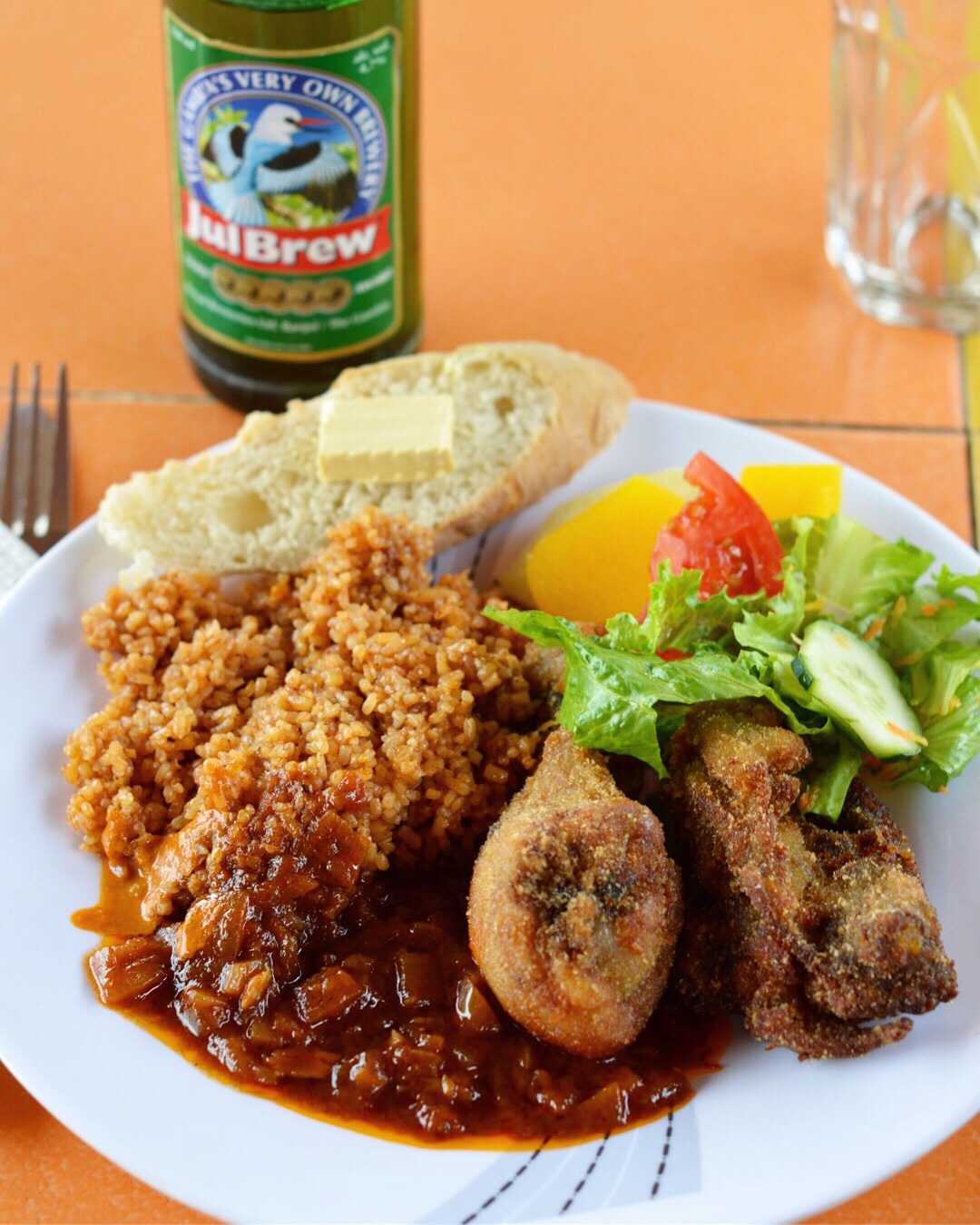 Just got back to minus 10 degress Celsius after a week in the tiny but amazingly nice West African nation of The Gambia.

The first time I tried to visit Gambia was last year, but due to the then long-time ruler’s refusal to step down after losing the elections and the neighbouring countries threath to invade – we did not go. Last autumn we had booked another trip, but that time we couldn’t go either. But hey, three times a charm! This time we managed to make it, and what a trip we’ve had. So without further ado, here are my Gambia what to and drink eat during a week in “the smiling coast”.

What to eat in the Gambia

Situated in Western Africa, landlocked by the larger nation of Senegal The Gambia obviously is influenced by the surrounding region. Dishes like yassa, benachin and domoda are all available over the entire region in various shapes and names. Before leaving, I had read that Gambia’s somewhat famous for its food, but the sources I found were slightly biased, so I took that with a grain of salt. But I shouldn’t have, they were right – Gambian food is great. Below is what I tried, although I was not even close to try everything I wanted during my limited time in the country. 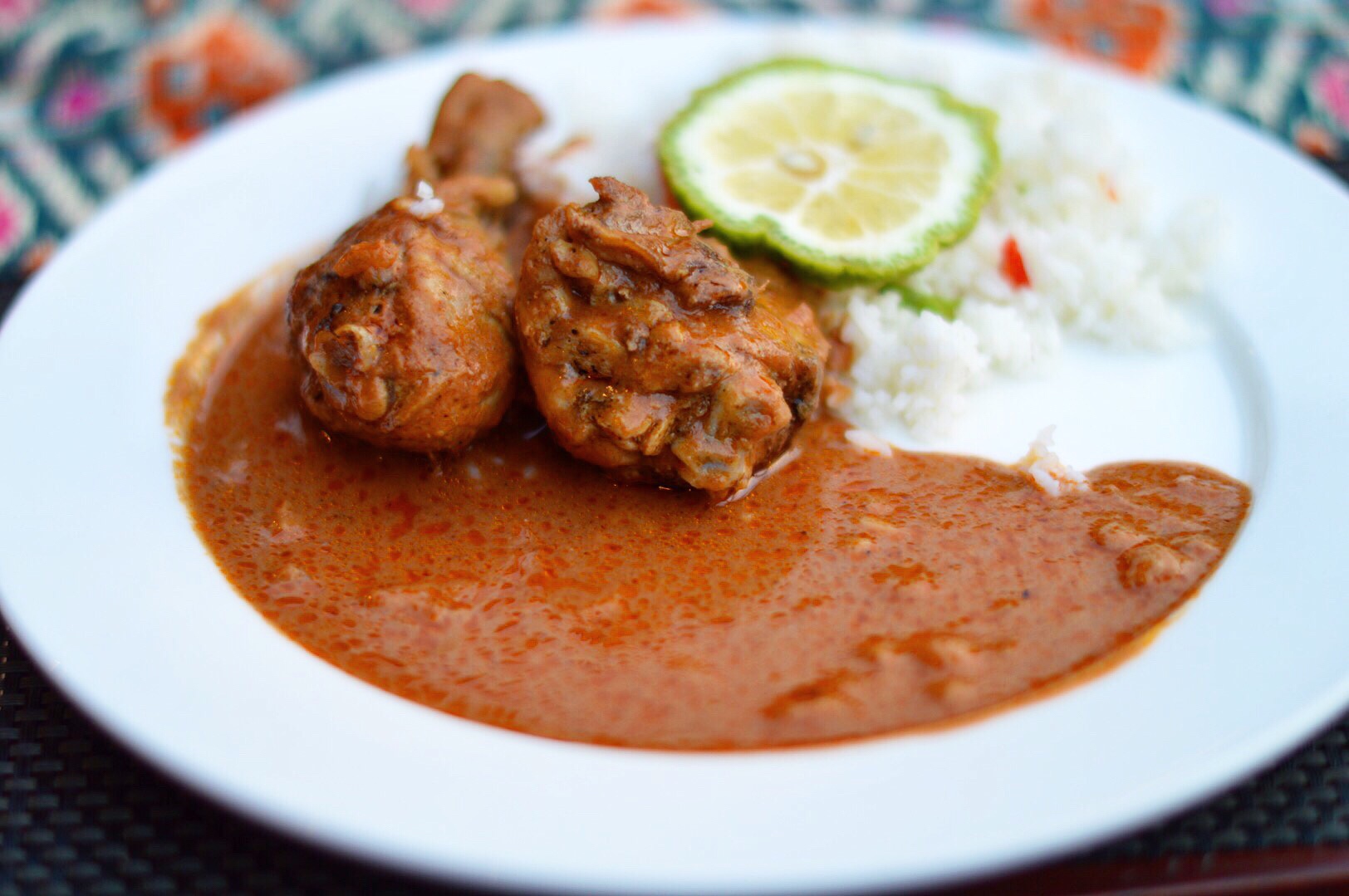 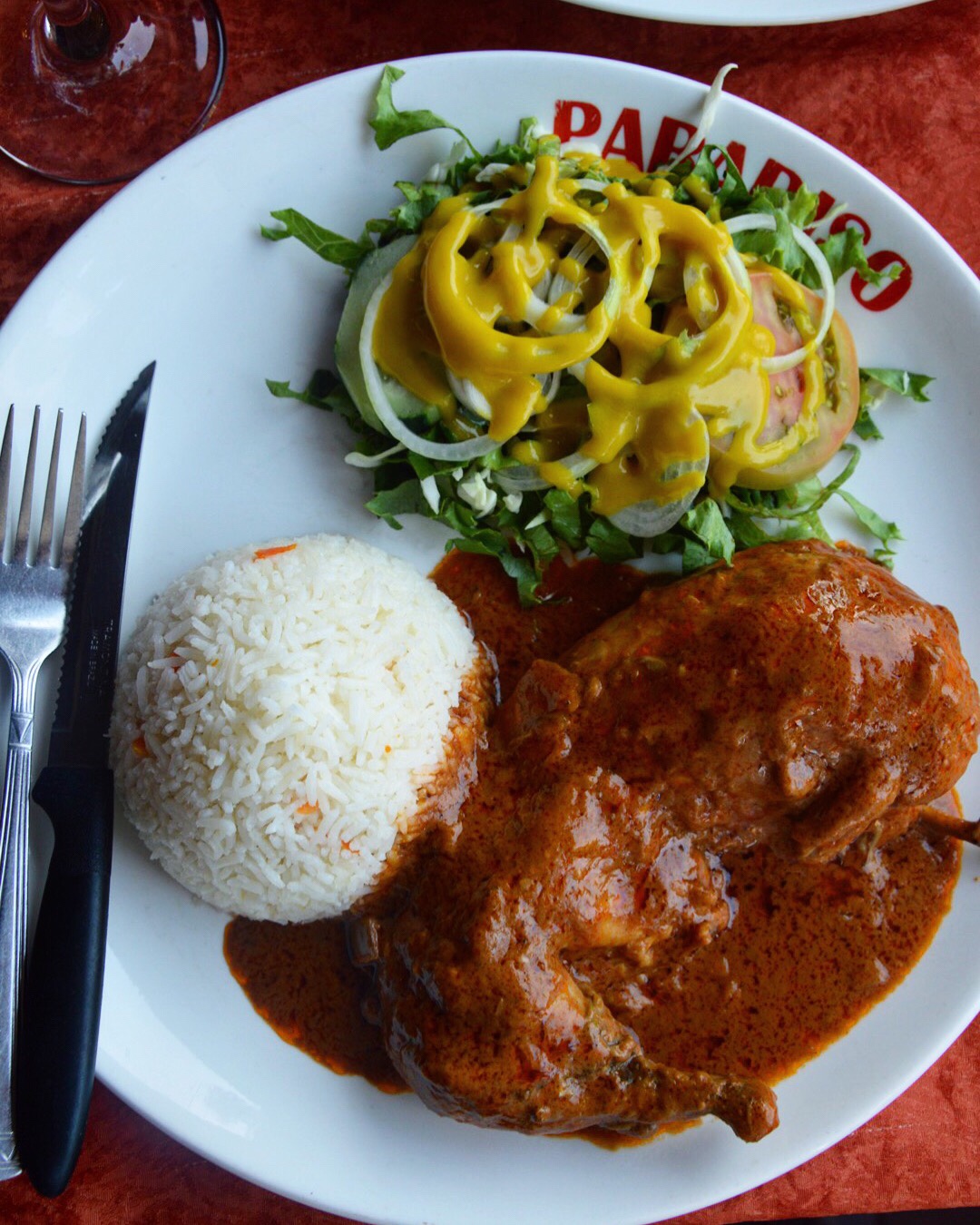 A peanuty groundnut stew usually served with your choice of protein. I tried it with beef and chicken. Both were great and you can also have it with fish and prawn, for instance. The flavour is a little bit like Thai peanut sauce – satay, but it’s saucier and richer/meatier in flavour. This was my favourite of the different stews and sauces I tried during my visit. In addition to groundnuts (peanuts) there is also tomatoes, onion and usually from what I understood also lemon or lime. The meat is slow-cooked in the sauce and both chicken and beef versions were “falling off the bond tender”. Served with rice and veggies.

Paradiso on the Senegambia Strip (my fav).

Senegambia Beach Hotel (on their buffet). 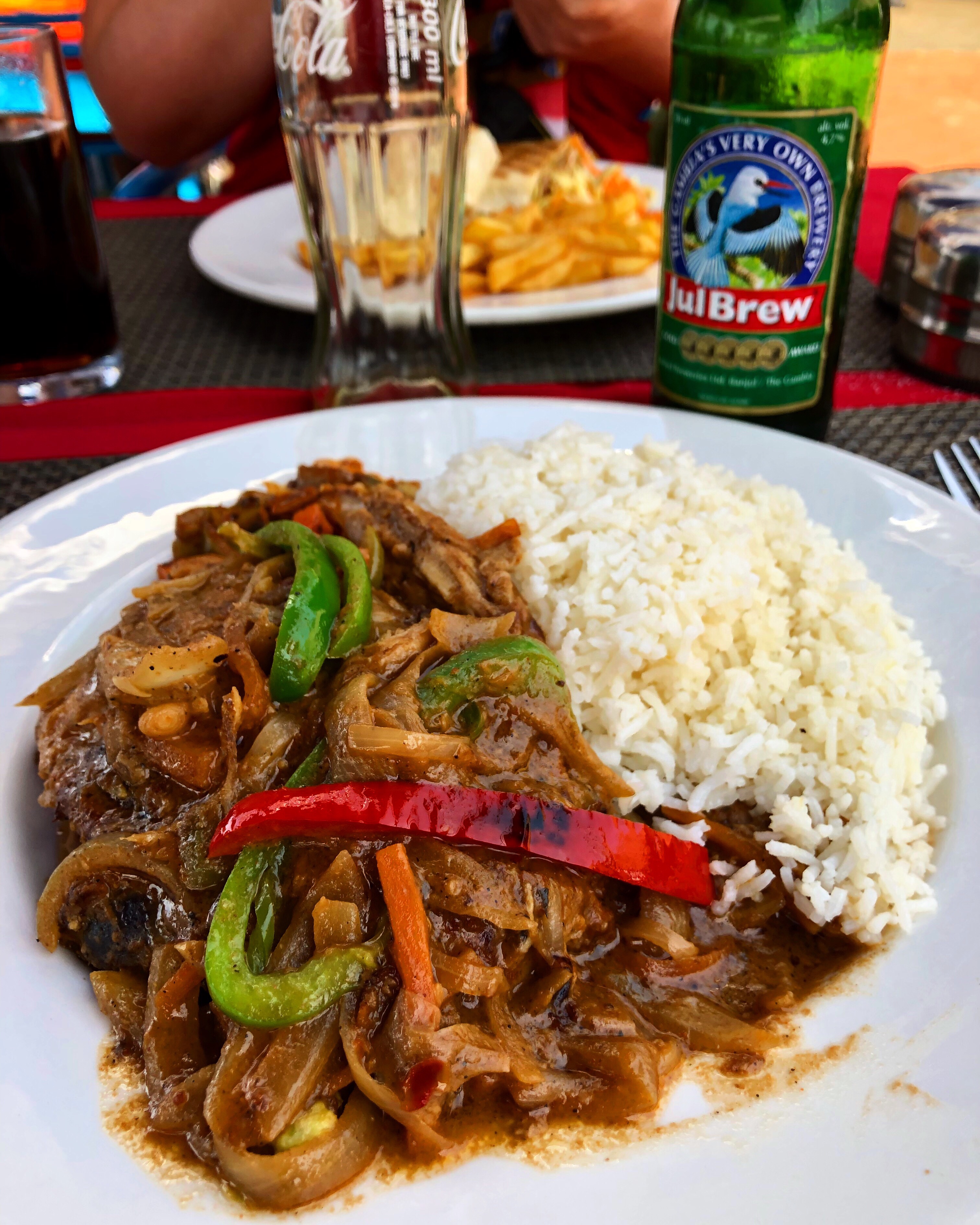 Originally a Senegalese dish called yassa au poulet but now popular all over West Africa. Yassa is an onion and lemon sauce or stew that is cooked together, like the domoda above, with chicken, beef, prawns or fish. We had versions that were a little bit spicy and also ones with a hint of ginger, making the yassa taste borderline Asian wok. No matter the different flavouring delicious. Fresh, rustic and yummy. Served on rice.

Where I tried yassa:

My favourite: at Senegambia Beach Hotel’s beach restaurant (a la carte). They also have a really nice yassa wrap on their menu. Only open for lunch though. 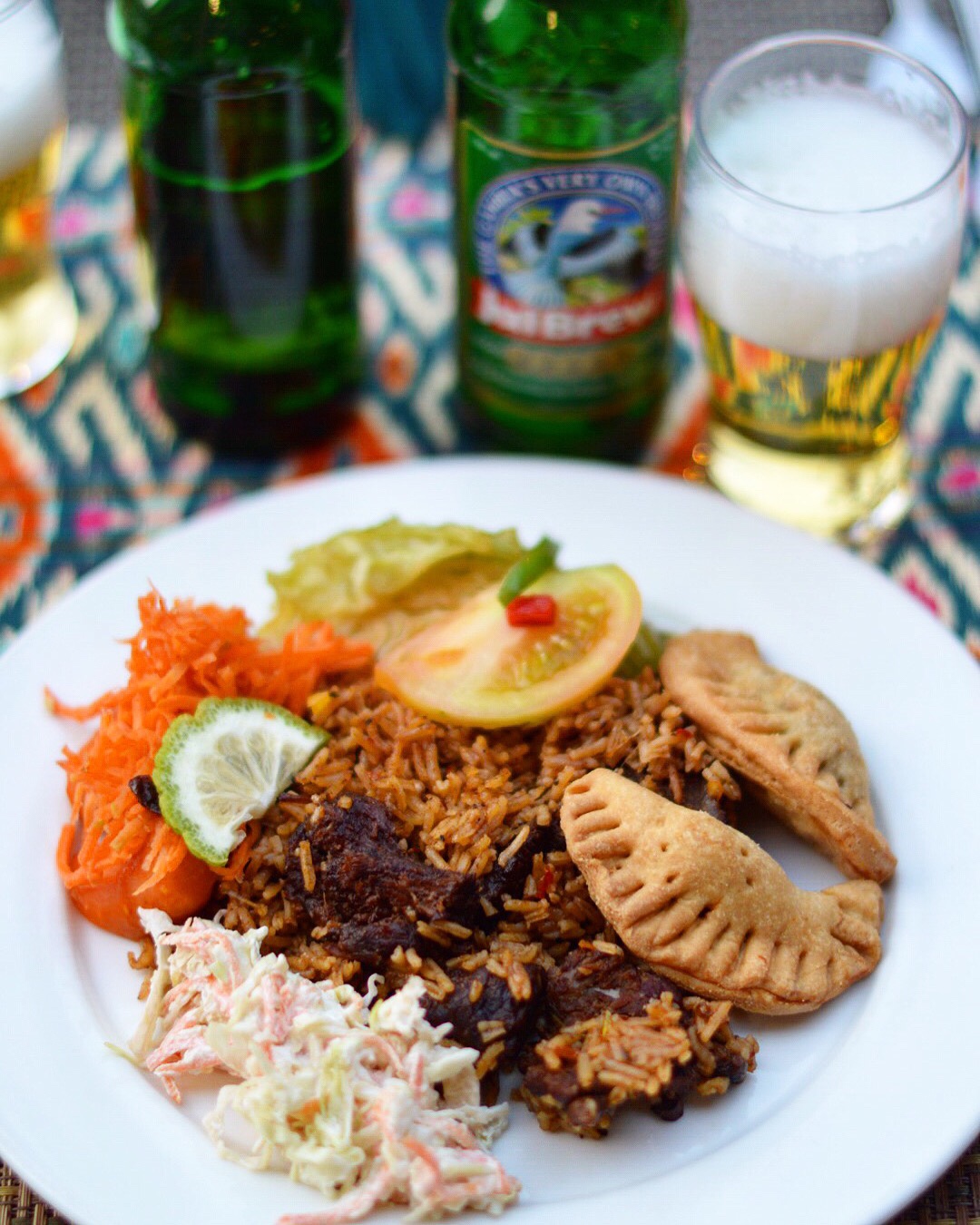 Benachin is a rice dish and it names means literally one-pot. Famous all-over West Africa under the name Jollof Rice this is a hugelt popular dish with tomatoes, onions, rice and oil that are cooked together, once again usually combined with your protein of choice. A really delicious, slightly oily rice dish which I had both with and without meat. My favourite version was with slow-cooked tender chunks of beef incorporated though.

Where I had Benachin rice

Did not try but heard from several sources that Kadie-Kadie was realy good and where the locals go for benachin. Only open for lunch though from what I heard and less busy from 14:00/2 pm. 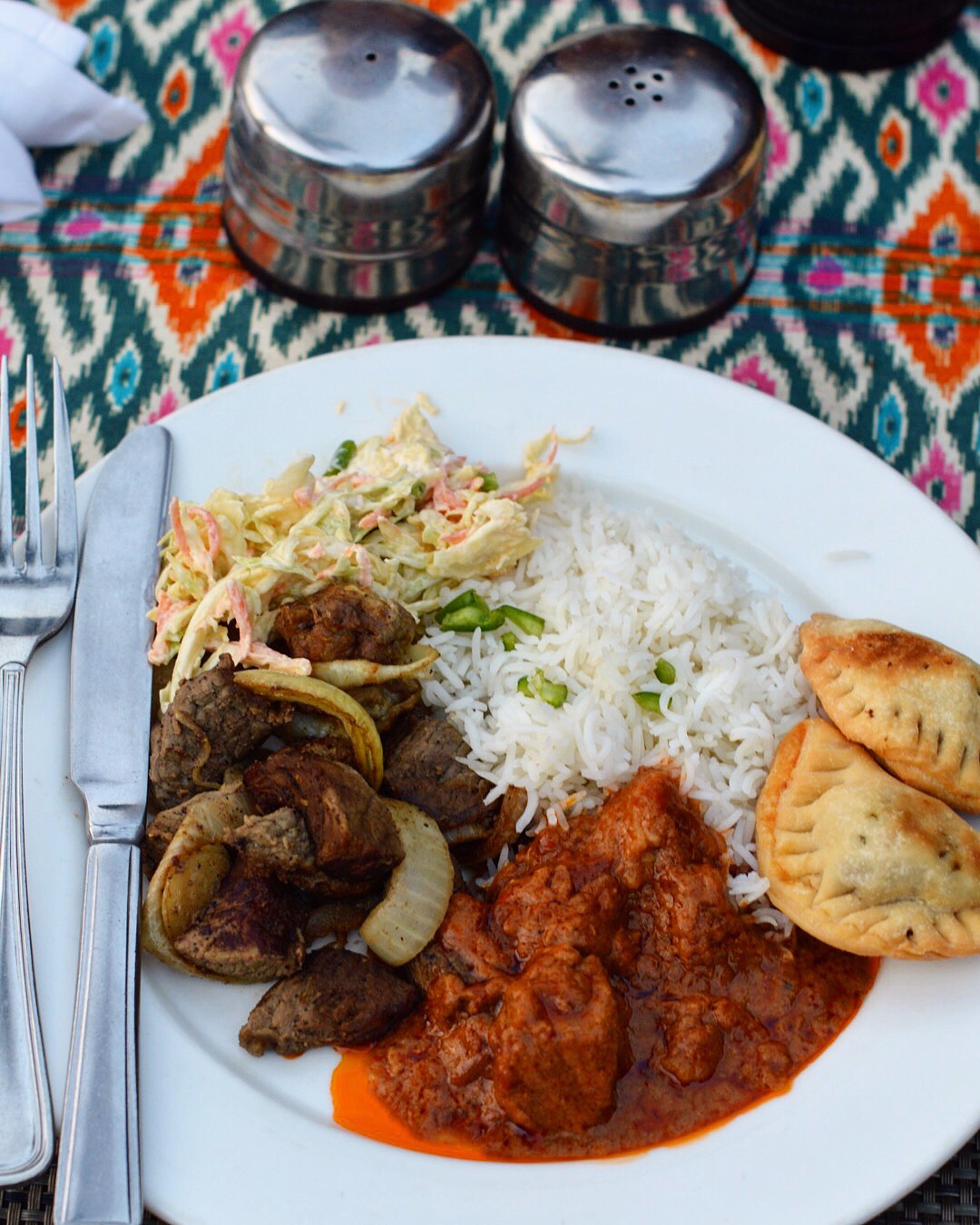 Afra is a quite simple, but delicious Gambian and West African dish also known as “dibi”. It is basically grilled or fried meat or chicken as well as onions that is post-grilling combined with a savoury, salty “sauce” of maggi stock cubes. You can eat it in a soft tapalapa bread (similar to baguette) or with rice.

Where I tried afra

In above picture the afra is enjoyed with beef domoda, coleslaw and Gambian meat pies at the Senegambia Beach Hotel’s dinner buffet. 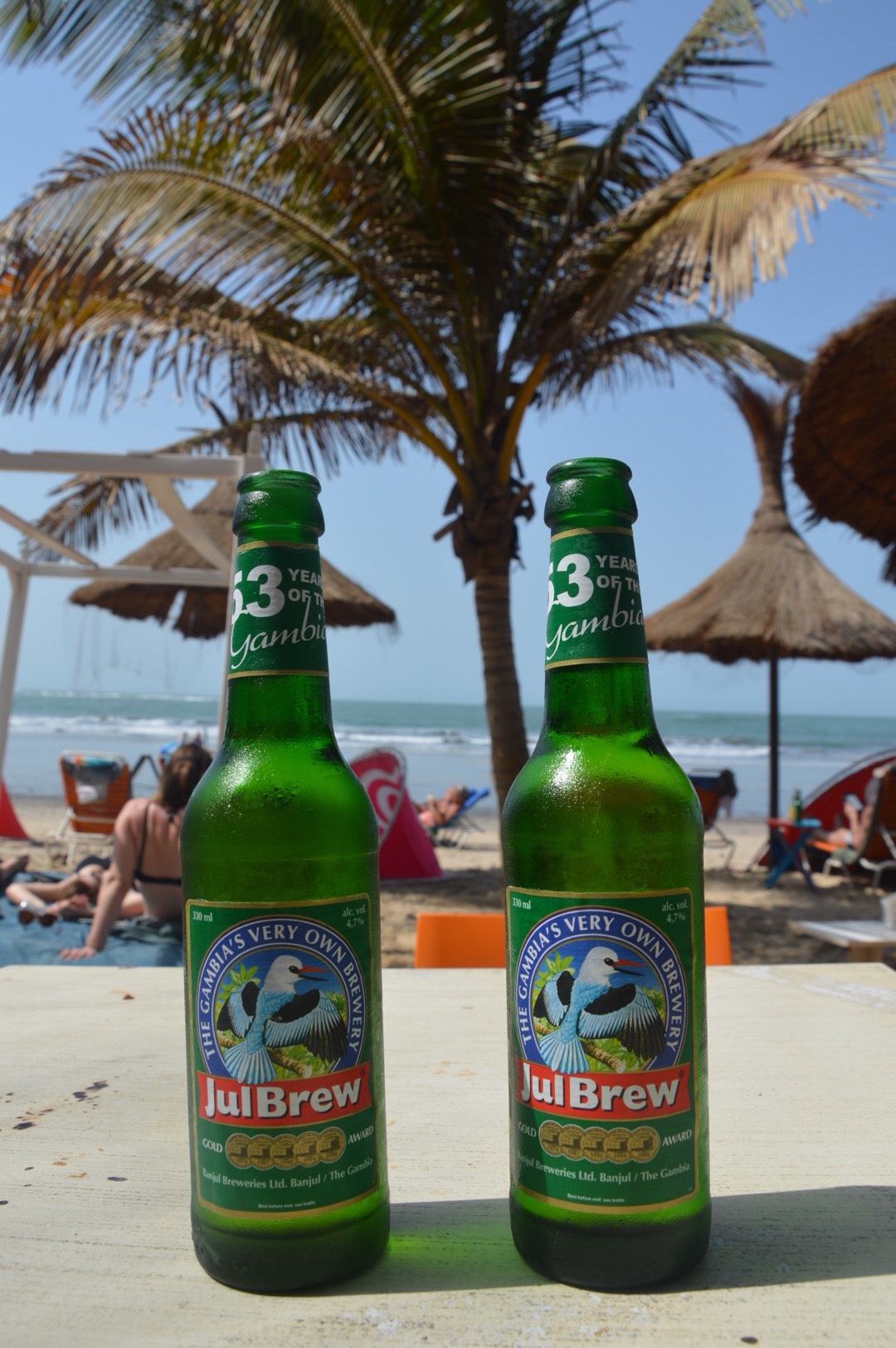 Gambia has their own beer, made by Banjul Breweries – hence: Julbrew. Although nothing spectacular, Julbrew, is a nice, relatively light (4,7 percents of alcohol) beer that works well with the local food as well as enjoyed ice cold in the sun. Prices vary from what I saw from about 35 dalasi (€0.8) to about 80 dalasi (€1,7) in restaurants. In supermarkets/mini markets slightly cheaper. 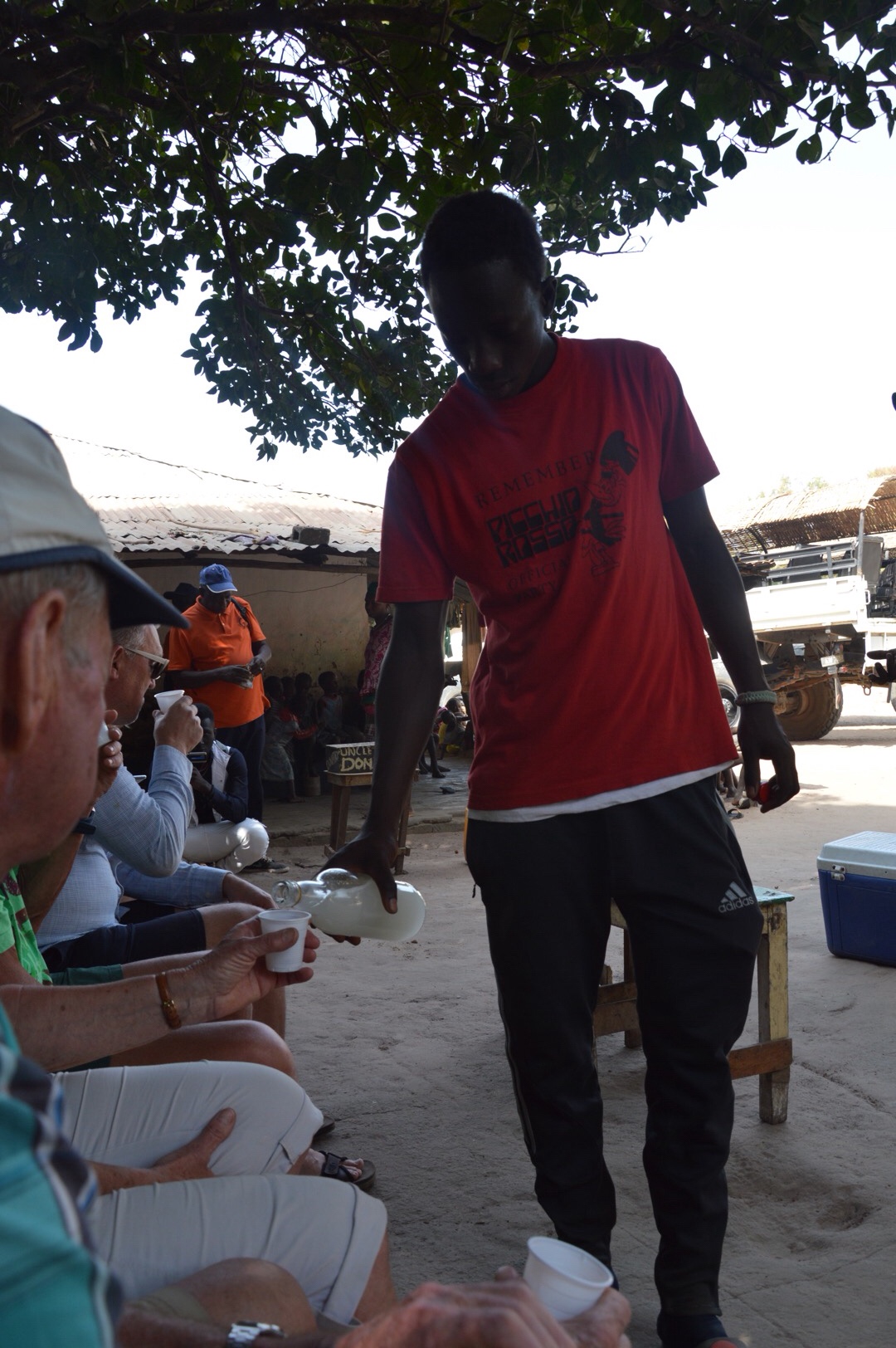 Palm wine (aka Sum-Sum or Kill Me Quick)

Palm wine is tapped, as the name implies, from palm trees. After a bit of time resting the sap, alcohol is created and within two hours palm wine reaches about 4 percents of alcohol. If it ferments longer, up to a day, it gets even stronger. After more than a day of fermentation though, the palm wine eventually turns into vinegar. We tried both the freshly tapped stuff which was non-alcoholic and the fermented and distilled version of local ‘fire water” aka sum-sum or locally named Kill Me Quick that was about 50 percents. Strong stuff!

As mentioned above; what a great food destination Gambia is! If you like slow-cooked food, stews and rich, savoury sauces, at really affordable prices, this is a great place to visit.