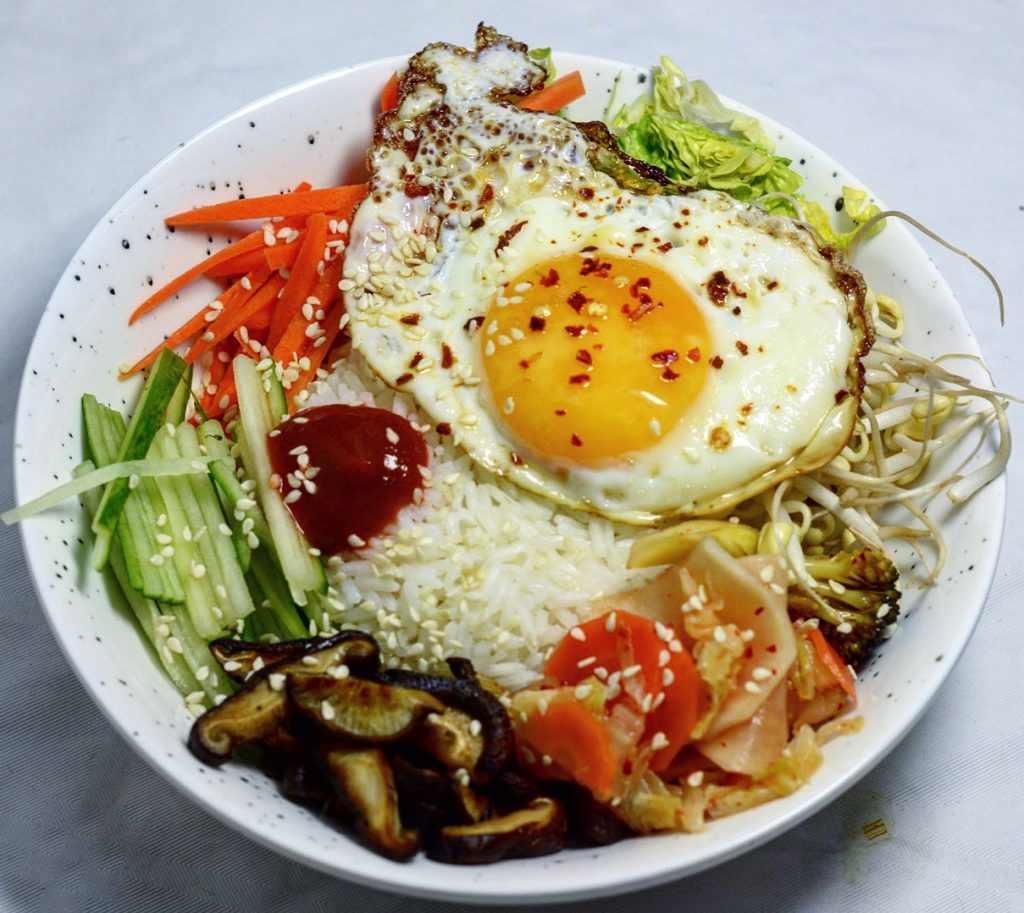 Bibimbap (비빔밥) is a Korean dish that literally means mixed rice. The first time I had bibimbap was in Tokyo after a quite amazing chance encounter with an old family-friend at Shinjuku Station in Tokyo during rush hour. After realizing that us, two Swedes, had run into each other at one of the busiest, most crowded places in the world, not to mention other side of the world, we went for bibimbap.

The bibimbap was served proper Korean style in a hot clay bowl, meaning that the rice and veggies were still cooked as the dish arrived at our table. We then mixed the rice with the also included raw egg, raw and cooked vegetables and hot chilli sauce. The result was a crispy, spicy, semi-warm rice dish with fresh crunchy vegetables (and probably some meat).

Bibimbap can be quite ambitious, with hot bowls and lots of different items put in it, or just a basic ‘mixed rice’. The common denominator is that it is always delicious.

Above picture and below recipe is of and for a homemade quite easy-to-make, no fuss vegetarian bibimbap. If you want it meatier you could easily add sliced chicken or beef, or maybe salmon.

What you need for the bibimbap 2-3 persons)

Hot sauce or gochujang chilli paste (you decide how much ?)

1 jar of Kimchi (buy pre-made, making your own is quite an effort)

How to cook the bibimbap

1. Cook the rice until done.

2. Julienne (eg. slice into thin strips like above photo) the peeled carrots and cucumber.

3. Slice and fry the shiitake mushrooms until golden brown and cooked through. The stems are bit though, so remove them if you don’t like that. They taste great though.

4. Slice the iceberg lettuce and the scallions.

6. Plate. Put rice in the bottom of a bowl, top with veggies, kimchi, eggs and hot sauce. Then mix everything around for your proper Koream mixed rice or bibimbap. 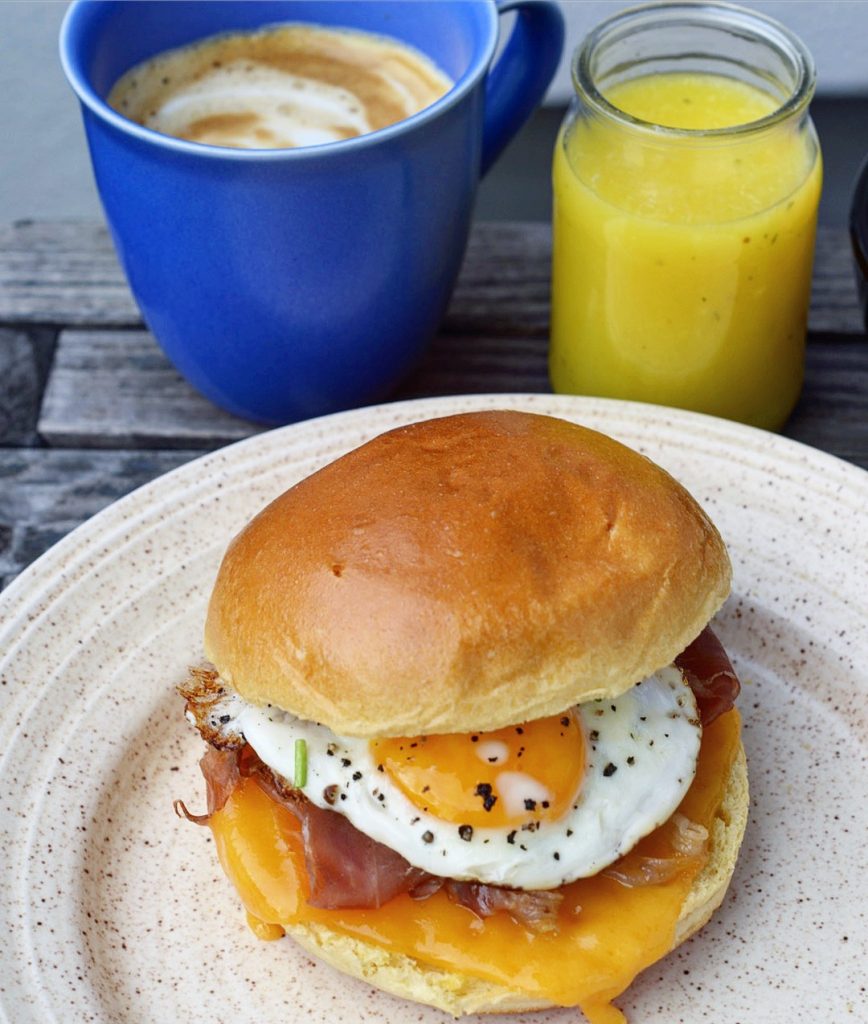 Last Saturday I woke up with a slight headache after a night of Korean food and too much Riesling and beer. As it happened, I had cheddar cheese, prosciutto ham, eggs and brioche rolls – and no urge to go to the store for groceries. The idea then came to me to make something a bit like a Mcdonald’s McMuffin.

I’m not sure I even need to make a recipe out of this since it’s so simple, but just for your convenience I will.

You need (for two sandwiches):

2 eggs + oil for frying them

How to cook the Mcmuffiny breakfast roll

1. Fry the eggs. Season with salt and pepper.

2. Put a slice of cheese and half of the han on each breadroll’s bottom part. Put in oven or micro-wave oven until cheese melts. Also toast/warm the top slightly.

3. Make the sandwich. Put the fried egg on top of the ham and cheese stack on the bottom bread. Sprinkle with chives if you have any, maybe some hot sauce too. Add top bread. Eat. Coffee is sort of essential. But tea should work too. 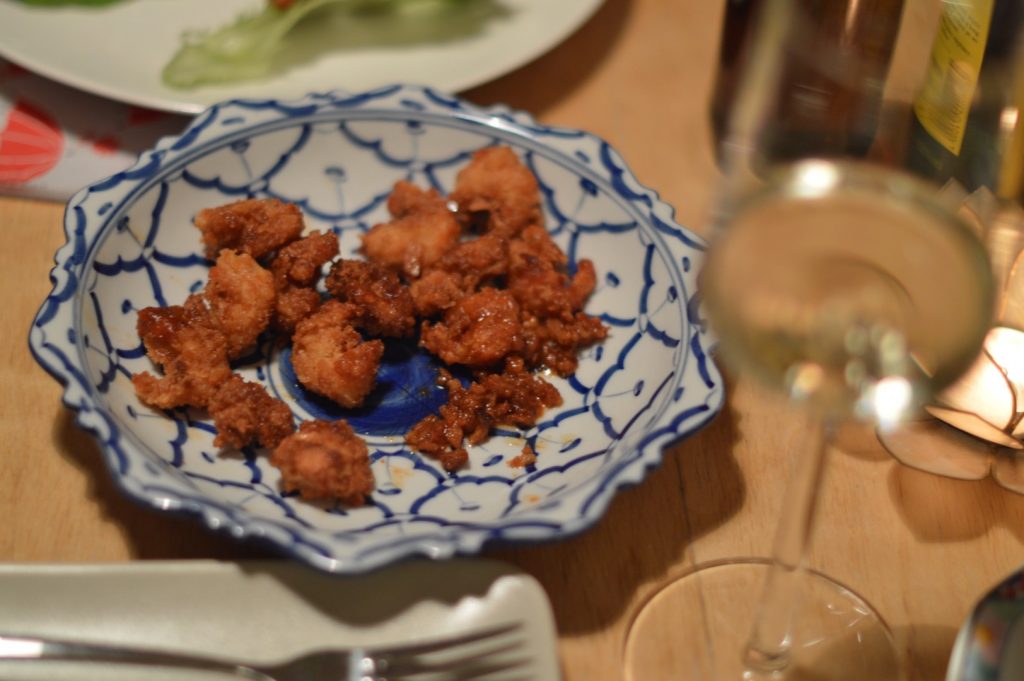 A non-poultry take on the sweet, spicy and deliciousness of a dish that is Korean fried chicken, or KOFC.

How to cook the Korean fried prawns

2. Dip prawns one by one, first in flour, then in the eggs, and finally in the panko.

3. Heat oil in a pan or deep-fryer. Fry the prawns till golden brown. Put on paper towels to dry/lose some oil (beach 2017 is coming up).

4. Melt butter in a pan. Add sugar and let dissolve. Remove from heat.

5. Put prawns in a bowl. Coat with butter-sugar-mix and hot sauce. Mix so that the prawns are covered by the buttery, salty, spicy and sweet coating.

Serve! For instance in lettuce leaves with sriracha mayo, kimchi and sesame seeds. Cold beer or crisp German Riesling works well with this! 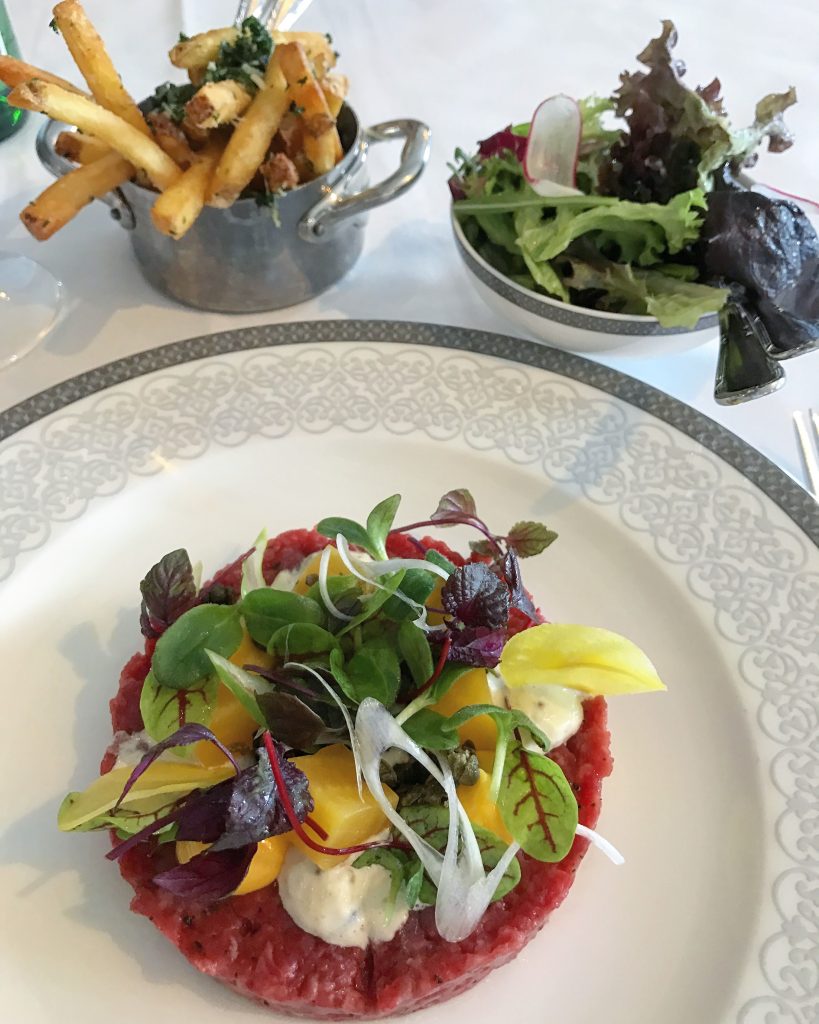 Visited Bobergs Matsal in NK (Nordiska Kompaniet) department store the other day for some fine-dining lunch. Bobergs Matsal was originally opened in 1915, but has been closed until a few years ago, when it was re-opened by chef Björn Frantzén of famous Frantzén restaurant in Stockholm.

Bobergs Matsal is a quite classic fine-dining experience, but generally only open for lunch, offering lunch eaters a in-Stockholm sort of rare opportunity to enjoy lunch with table service, white tablecloths and well executed, fancy plating sort of food.

I’ve been to Bobergs Matsal a couple of times, and it has been consistently great every time so far. My latest visit was no exception and I really enjoyed the steak tartare ‘Parisienne’ which in addition to delicious steak tartare included deep-fried capers, a creamy baked egg yolk, horseradish mayonnaise, pickled yellow beetroot, herbs and mustard. The tender steak worked really well with the pickled crunchy beets and the fatty mayonnaise. The ultra-crispy fries, topped with a fancy sprinkle of fried parsley and parmesan cheese, worked like a charm as a side. The accompanying salad was a bit redundant, but nevertheless tasty. 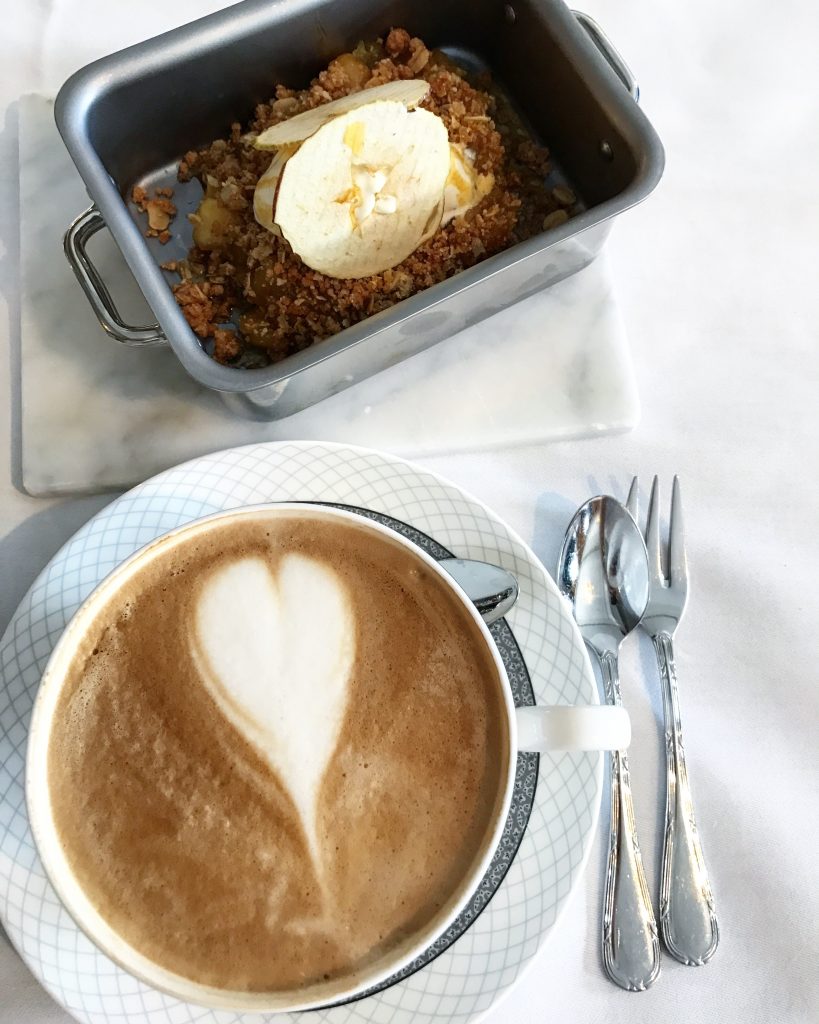 For dessert, I went, after much agony (was also keen to try the glace au four), for the Cardamom-baked Ingrid Marie apples. The apples were served ‘crumble pie-style’ with vanilla ice cream, a caramel sauce, an oat and dinkel crumble, and some crispy apple chips. It was a very delicious dessert, but also very rich. If you’re still hungry after your main, go for it. Otherwise, the delicious chocolate ice cream with caramelized banana and rum creme could be a good bet. I ordered a quite enormous latte to have with the dessert, and it too was very good.

Bobergs Matsal is a solid bet for a fine dining lunch in Stockholm, and during my four visits, I’ve left happy.

Prices are expensive, but not crazy expensive, depending a bit on what you order, of course. Mains are roughly 200-400 SEK, desserts 65-90 SEK. 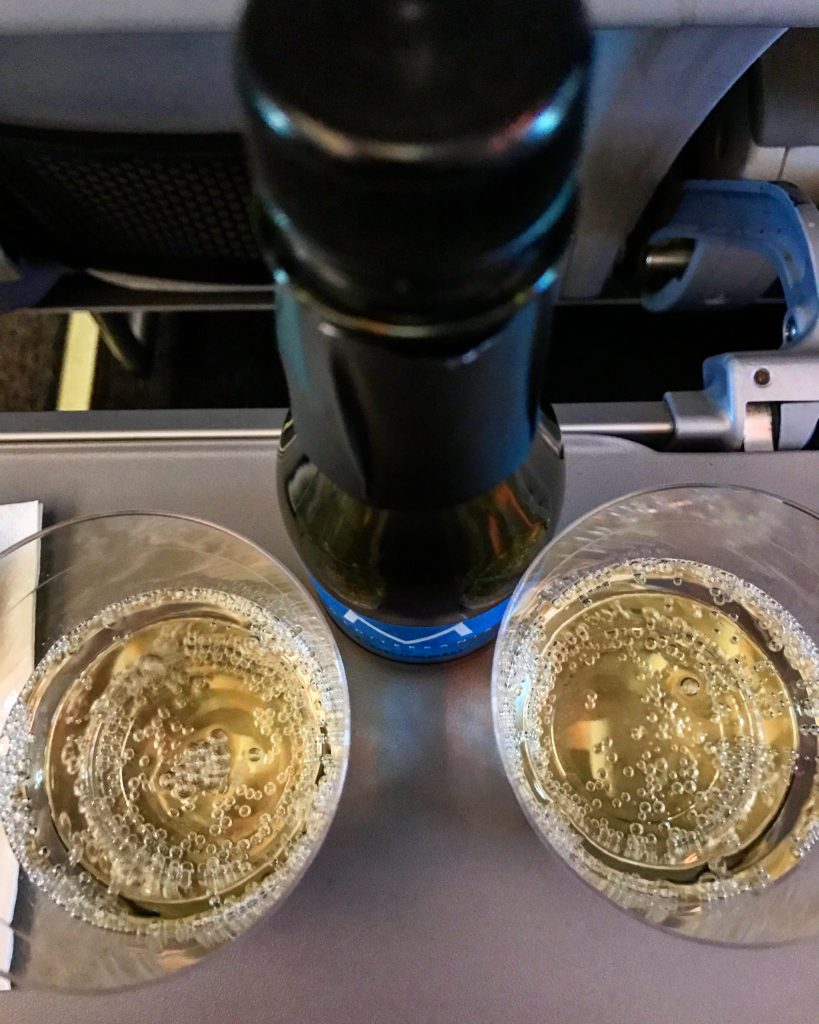 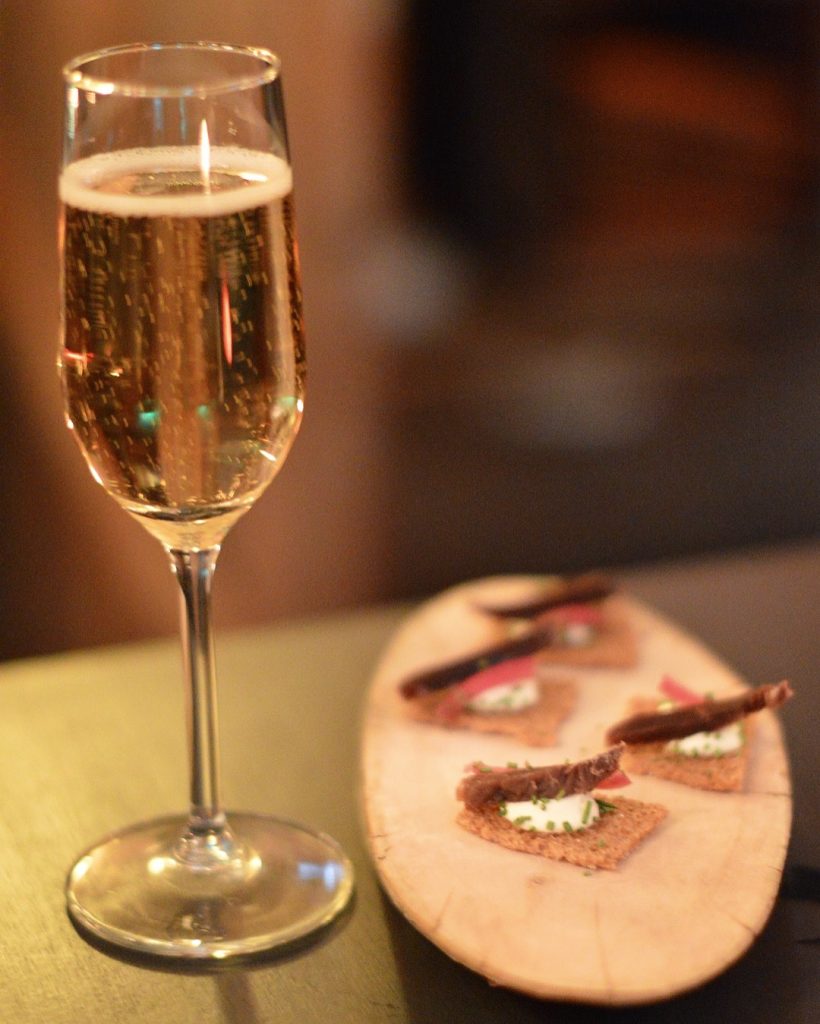 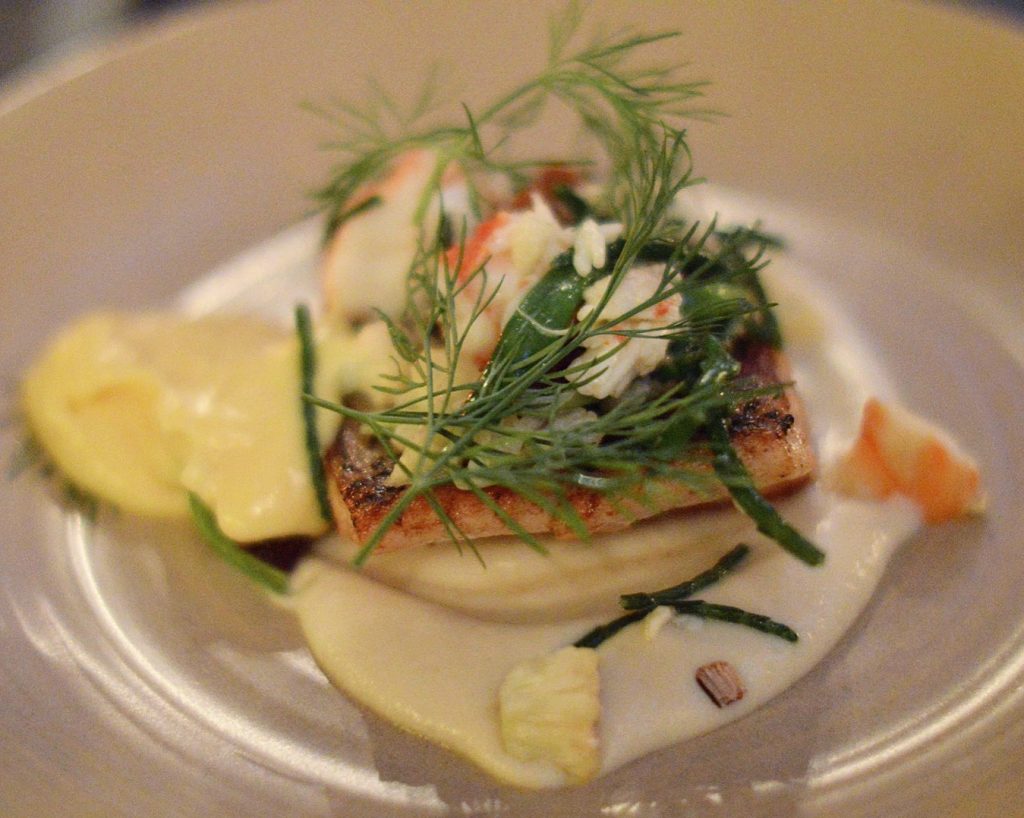 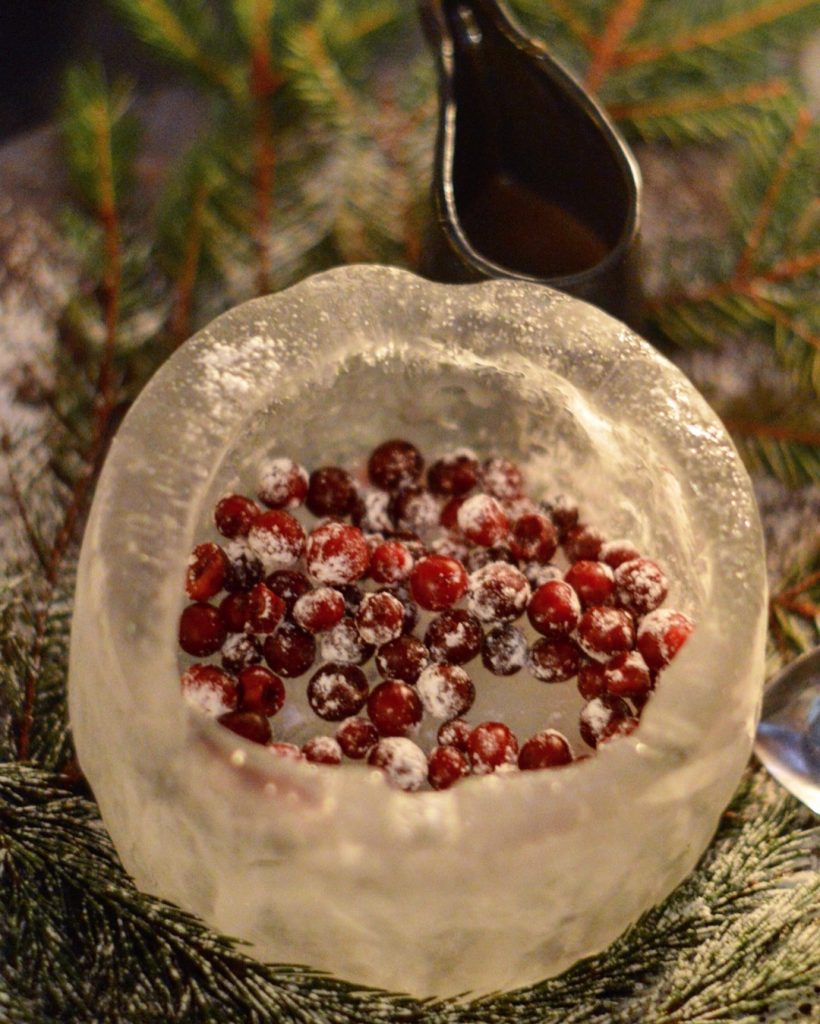 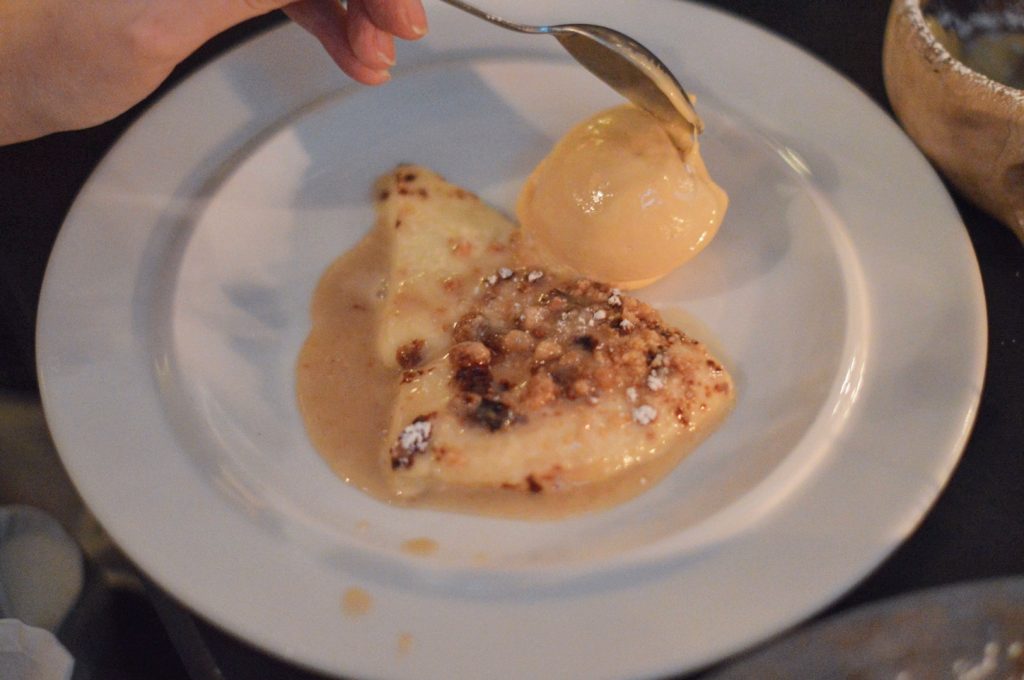 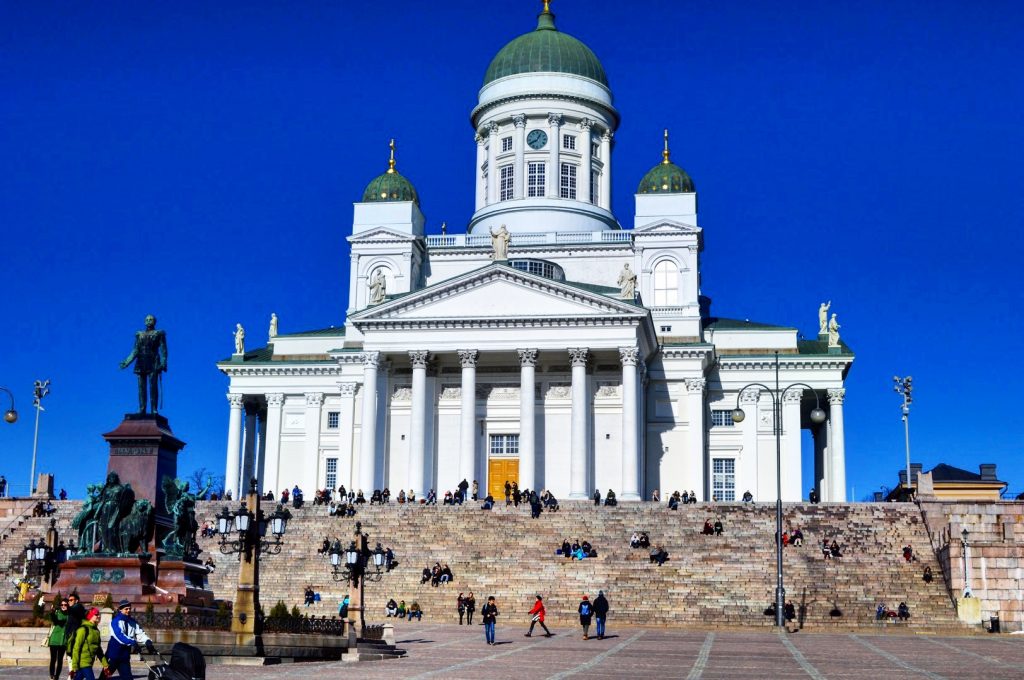 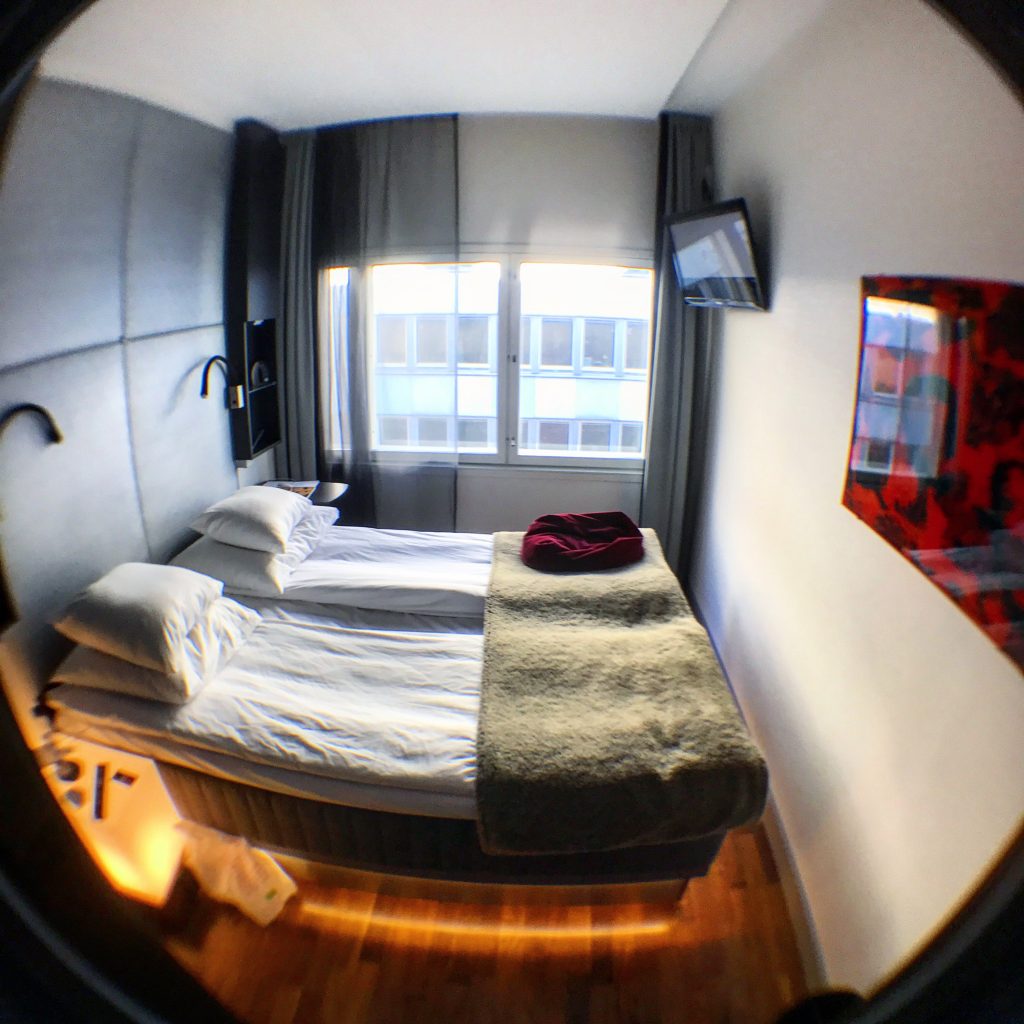 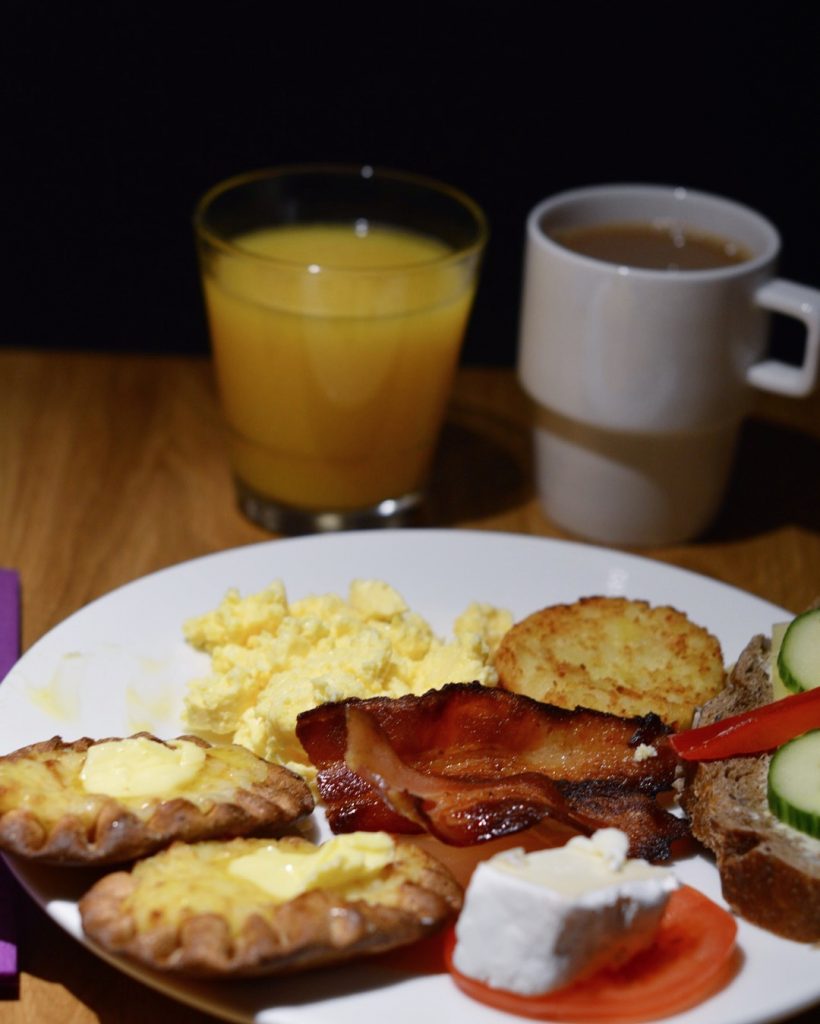 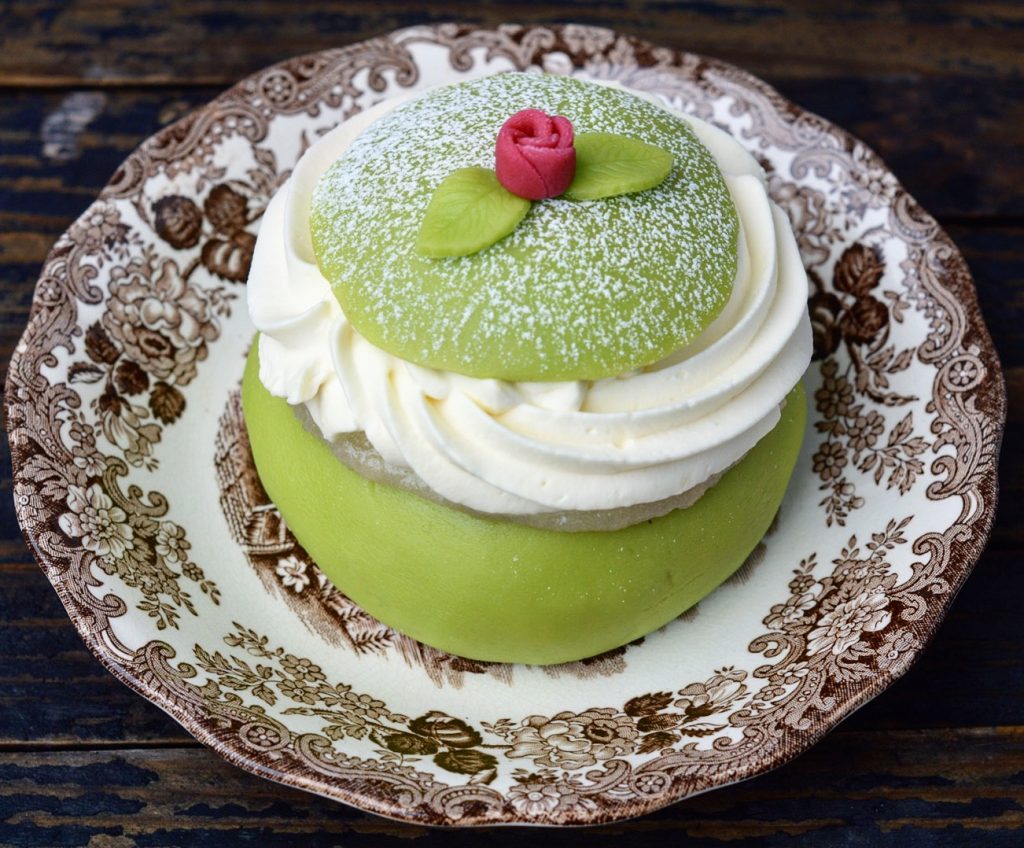 The prinsessemla, or prinsess-semla, was recently invented. Now it has reached Stockholm and Konditori Vallmofröt in Hagsätra. The creation is a fusion between two classic Swedish pastries; the semla and the prinsesstårta (princess cake). Since both are heavy in their whipped cream content, the combination is a quite good one, with both’s main features remaining noticeable. I liked it very much, but it is indeed rich and you might want to share it if you want to stay awake post-fika.

Where to find the prinsessemla 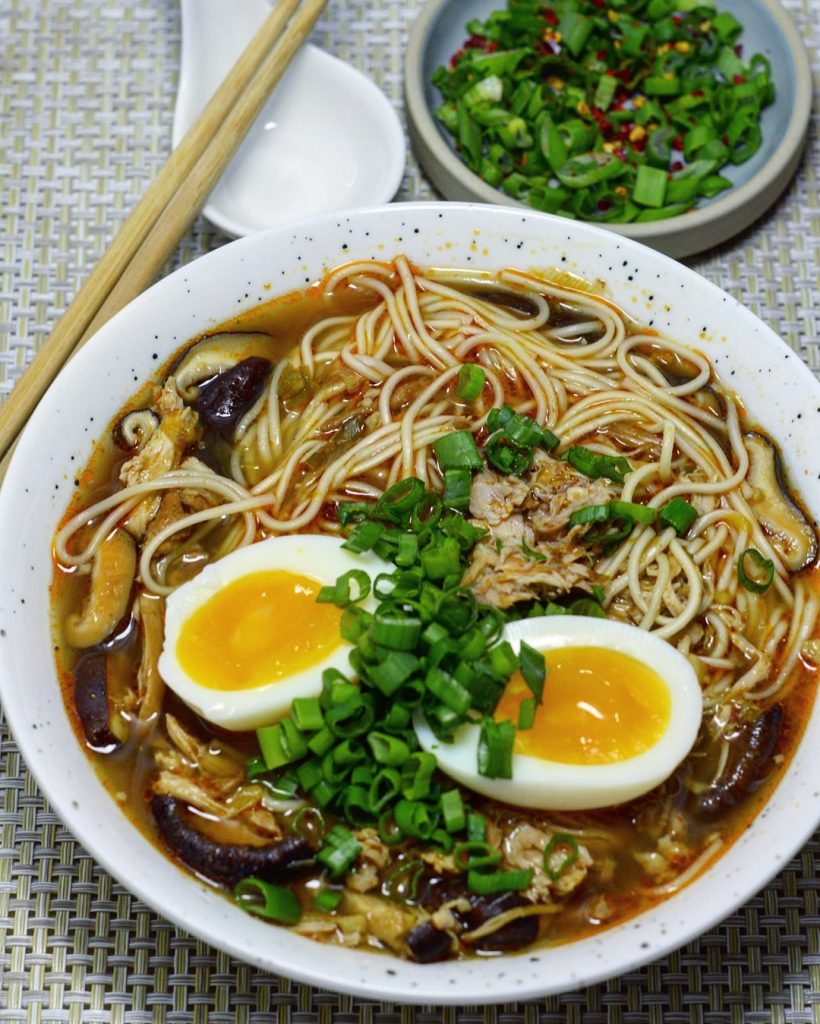 The other day I watched Netflix’s Chef’s Table about American chef Ivan Orkin that moved to Japan, and opened a ramen joint that quite quickly was named one of the best in Japan. This made me want to move to Tokyo and open my own restaurant too, but since that won’t be happening anytime soon, I decided it at least was ramen cooking time at home.

What you need (for approximately 2-3)

Noodles, we used Nissin’s brand premium ramen noodles. About a third of a package for two.

1 tablespoon of Sriracha hot sauce (can be excluded)

2-3 chicken stock cubes (or make your own)

1. Peel and finely chop garlic, the white stems of the spring onion and the ginger.

2. Fry chopped vegetables in oil on medium heat in a cooking pan until soft, do not brown.

3. Add chicken thighs to the fried vegetables, you do not need to trim as you’ll do that during the “pulling”. Let cook for a couple of minutes till chicken’s a bit coloured.

4. Add soy sauce, stock/stock cubes and hot sauce. Stirr occassionally and let simmer for about an hour on medium heat. Add water if needed, if soup gets too reduced.

5. When an hour has passed, slice the shiitake mushroom caps. Also keep the stems. Add both to the soup and continue to simmer.

6. Meanwhile mushrooms cook, it is time to pull the chicken thighs. Remove them from the broth and shredd them with two forks until ‘pulled’. Remove any remaining sinews, bones or similar. Then put the pulled chicken back into the soup.

7. Cook noodles until just cooked (eg. ‘Al dente’) since they’ll be in the broth which will make them cook a little bit more.

8. Serve! Add the noodles to bowls, pour over broth (remove the shiitake stems if you’re sensitive, they are a bit chewy). Top with the finely sliced green part of the spring onions and egg halves. Enjoy!